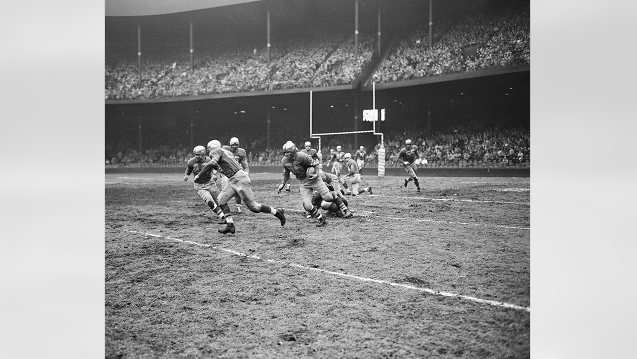 Today, Green Bay Packer fans have the chance to see every game of the season on TV.  Decades ago, fans had to scramble to see the Pack on the tube.

Unlike today’s multi-billion dollar TV contracts that line the pockets of NFL team owners, televised games in the early years of the league were hard to find. The first televised pro football game was a matchup between the Philadelphia Eagles and now-defunct Brooklyn Dodgers in 1939.  Even the NFL championship game was not televised until 1948.

In 1950, Los Angeles and Washington were the first teams to have their entire schedules televised, while other franchises had a limited number of telecasts. In 1951, the DuMont Television Network, an early programming channel that operated from 1942-56, paid $75,000 for the broadcast rights to the NFL championship game.

Underfunded from the outset, DuMont aired in 32 cities in 1949, mostly in the northeastern quadrant of the continental United States. But DuMont made a little bit of a splash with the NFL, and was scheduled to broadcast the Thanksgiving Day game from Detroit in 1951 as well.

Detroit hosted its first Turkey Day matchup in 1934, and had been a Thanksgiving mainstay since 1945. But games on the November holiday were not new to the NFL, as most teams played on Thanksgiving in the league’s first decade, the 1920s. Some continued to play in to the 1930s and beyond.

By 1951, Green Bay’s glorious run of NFL titles was a distant memory. The Packers captured six league crowns between 1929-44 and suffered just one losing season (1933) between their inception in 1919 and 1947. After that, the bottom fell out, and survival was an annual issue for the next few years.

As the Thanksgiving game approached in 1951, Green Bay was a combined 11-33 in the previous three and a half seasons. By contrast, the Lions were on the cusp of their glory years. The franchise went to four NFL title games in the 1950s, winning three.

The Packers were struggling to keep their heads above water as they came into Thanksgiving 1951 at 3-5. Detroit, by comparison, was optimistic at 5-2-1. But the idea of a nationally televised game brought plenty of excitement to Wisconsin.

Estimates had the game drawing an audience of up to 24 million, a huge number for the era. But fans in Green Bay had to scramble to watch, since there was no television station in the city at the time (and would not be until one was established in 1953).

Since the nearest DuMont affiliate was WTMJ in Milwaukee, Green Bay residents with television sets hoped their reception was strong enough to watch. Some planned to drive to Milwaukee or Sheboygan to view the game, while others were relegated to listening on the radio.

Such was life in the NFL’s smallest city. Green Bay team historian Cliff Christl notes that the capacity of the Lions’ home facility, Briggs Stadium (later called Tiger Stadium) was 58,000 – larger than the population of Green Bay, given in the 1950 census as 52,735.

The Packers came ready to play, and raced to a 21-10 lead early in the third quarter. The Lions, however, responded with 21 unanswered points to lead 31-21 at the half.  They added a score early in the third to extend their lead to 17 before Green Bay again pulled to within 10.

The rest of the third quarter belonged to Jack Christiansen, a stalwart of the Lions’ secondary throughout the decade, who was also a star on special teams. He returned a Green Bay punt 71 yards for a touchdown to build a 45-28 lead, then added an 89-yard punt return for a score later in the same quarter to ice the win.

Christiansen became the first player in NFL history to return two punts for touchdowns in the same game. A Green Bay score in the fourth made little difference in a 52-35 Detroit win.

The game set a mark for the most combined points (87) in Green Bay history, a record that stood for thirty-two years. It now ranks third all-time among regular-season contests in the history of the franchise.

The Lions would host Green Bay in the annual Thanksgiving game for another dozen years. The run finally ended after the 1963 game by Vince Lombardi, who declared, “the big reason I’m against [playing on Thanksgiving] is that four days is not enough time to get ready for a game” – thoughts that have been echoed by opponents of Thursday Night Football today.

Lombardi added that “with the new television contract, every club will receive the same amount. If we are to continue in this game, I feel we should receive additional revenue.”

Certainly, the Packers rake in their share of the massive TV contracts of today – a far cry from the oddity of a televised game at Thanksgiving seventy years ago.

Tom Emery is a freelance writer and historical researcher from Carlinville, Ill. He may be reached at 217-710-8392 or ilcivilwar@yahoo.com.