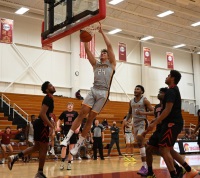 Former Denmark star Patrick Suemnick dunks in a game at Triton College. Suemnick will play at the University of West Virginia this winter. Photo by James Smith/Triton College Athletics

Patrick Suemnick has traveled a long road to reach a Power 5 Conference and he worked hard to get there.

Patrick Suemnick’s route covered many more than that. From Denmark to Don Bosco Prep in Indiana to Robert Morris University in Pennsylvania to a basketball showcase in Atlanta to Triton Junior College in Chicago.

The fact is, when Suemnick began playing basketball in sixth grade – reluctantly, he’ll tell you – no one could have envisioned such a road at all, or at least not one that he would ever travel down.

“He’ll say it before anyone else, ‘I sucked in sixth grade,’” says former Denmark teammate and still-close friend Zane Short, laughing. “I remember he was already 6-2 or 6-3 and just head and shoulders above everybody else. But he had this jump shot – and he’ll tell you this – where he would turn and just sort of throw it up one-handed. His guide hand was like a foot away from his shooting hand.”

But his eighth-grade coach Bart Gezella saw looming potential in the gangly, awkward kid. He took him aside and told him, if we can get you a jump shot, you’re gonna be good.

“Yeah, to say I was a work in progress is one way of putting it,” Suemnick says. “I was a skateboarder. I played baseball. I played football. But my dad was on the state championship team at Denmark and he’s a big basketball guy so I went out.”

The 6-8, 230 pound Suemnick recalls not being able to dribble if he wasn’t watching the ball and his memory of his shot varies from Short’s only in the sense that he thinks he shot two-handed. They both agree that it was not going to take him far, certainly not to the University of West Virginia.

Jump ahead nine years, though, and look at him now: a sophomore at a Power 5 school in the Big 12 Conference.

How did he get from there to here?

“I got some film on a kid from Denmark, Wisconsin,” Clancy says. “He was physically imposing and very athletic. I knew right away I wanted to coach him.”

When Clancy took the Triton College job in July of 2021 he had Suemnick come in for a workout. What he saw – Suemnick dominating a matchup with a former Big 10 player who had transferred to Triton – convinced him to offer a full scholarship.

Suemnick would help lead the Trojans to the Final Four earlier this year. He averaged 12 points and six rebounds and also blocked 34 shots, all second-highest on a team that finished 30-6 and lost by four points in the national semifinals to the eventual national champs. Suemnick had one of his best games in the quarterfinals when he went 10 of 15 and finished with 21 points and nine rebounds.

Along the way, Suemnick collected plenty of honors, including being named an NJCAA First Team All American and Region 4 Division I Player of the Year. He also earned First Team All Academic status after posting a 4.0 GPA.

Denmark head coach Cody Stelmach, who retired after last season, remembers what Short and Patrick remember: a tall kid who could rebound and block but had a limited skill set.

“But he has always exceeded expectations,” says Stelmach who guided his Vikings to the 2019 state semifinals. That team included Suemnick as well as Zane and Donavan Short, who will play for UW-Green Bay this winter. “He always had this underdog mentality but he always bet on himself and that’s hard to teach. He just continued climbing that ladder and getting better and better. You always root for that type of kid.”

By the time Suemnick was a sophomore he was beginning to wonder if he just might not make this basketball thing work. A resident of Green Bay, he began getting up at 4:30 a.m. and working on his game at the Kroc Center before heading to school in Denmark. At school he would use his lunch period to hit the gym and work on his shot, his dribbling, his moves.

“It was all day every day,” Suemnick says.

“Everybody, including me, knew he was going to be better than he realized his freshman year,” Short says. “And then he started putting in the work. His sophomore year he got the call up to the varsity. The jump in his game was not a natural one; he just decided he wanted to be a good basketball player.

“The thing is, I think he kind of liked basketball in middle school. But he fell in love with it at the start of high school.”

It all culminated in that magical 2018-19 season when five kids who had played together for seven years won a regional title, then a sectional title and made it to Madison for the Division 3 state semifinals. That season, Short led Denmark at 19.9 points per game. Suemnick was right behind at 18.4 while shooting with 61 percent accuracy. He led the team in rebounds with 10.4 and blocks (2.9) and also dished out one-and-a-half assists per game, earning him All-State honors. He also christened Denmark’s brand new gym that year with a 22-rebound performance in the Vikings’ first-ever game there.

The trip to the Kohl Center only fed Suemnick’s increasingly lofty ambitions.

“That senior run, that’s what shaped all of this,” Suemnick says. “That feeling of running out on the court at the Kohl Center and playing in front of thousands of fans? I’ve been chasing that feeling ever since. I couldn’t quite get it at Robert Morris.”

He found a facsimile of it at Triton, thanks to the run to the national semis. He figures to find it for real playing in the Big 12 at Allen FieldHouse in Lawrence, at the Ferrell Center in Waco, at Hilton Coliseum in Ames and, of course, at the Coliseum in front of raucous Mountaineer fans.

Patrick Suemnick is much more than a basketball player, though. He’s smart; he’s relaxed; he’s fun-loving; he’s well-liked: that’s the unanimous conclusion of his coaches and his teammates and friends.

“He’s an impressive human being,” Clancy, the Triton coach says. “He became the face of our program in just one year. No one embodied the student-athlete more than Pat Suemnick. And he’s obviously smart. Not too many kids come to a juco and tell their coach they want to study biochemical engineering. He’s well-traveled and well-versed in a lot of different things.”

Stelmach says Suemnick can be quiet so you might not initially recognize just how smart he is, both on the court and off. But once you get a chance to talk to him behind the scenes, Stelmach says, it’s pretty obvious.

Short laughs, calling his friend “an undercover genius. He’s doing all the other dumb stuff that other high schoolers do,” he continues. “He wasn’t stuck in the books or isolating with his studies. But then I got a look at his GPA and it was like 3.9 and he killed it on the ACT. And you wonder, ‘Is he just a genius or something?’

“But no, he’s a very smart kid. He kind of ruins the narrative of the basketball player who doesn’t care about academics.”

Josh Eilert, an assistant coach under Bob Huggins at West Virginia and Suemnick’s position coach, didn’t recruit Suemnick and has known him only since he arrived on campus in July. But his impressions of his sophomore wing align with all Suemnick’s previous coaches, calling him an outstanding person, loaded with charisma and fun to be around.

“People gravitate toward him,” Eilert said. “That’s huge given how much time we spend together. Having personalities like that is a breath of fresh air.”

After just two months on campus, Suemnick has been named to the Student Advisory Council.

Before enrolling at Triton, Suemick drove nearly a thousand miles to show off his skills at a basketball camp in Atlanta that was heavily attended by scouts from around the country. It was there that Larry Harrison, a Mountaineer assistant coach and one of the top recruiters in the country, discovered Suemnick. Others were impressed, too, and several offers rolled in.

What West Virginia likes about Suemnick, the player, is his versatility, his athleticism and his work ethic. Not exclusively a post player at Denmark – Suemnick possessed a solid midrange jumper – he will live much more on the perimeter as a stretch-four wingman for West Virginia. He has become a very good three-point shooter, knocking down 41 percent of them at Triton.

“Where I used to roll off of screens (to the basket), now I’ll pop (to the perimeter),” Suemnick explains. “My role has evolved as needed. I’m very confident in my shot. And I want to play for money one day so I need to expand my game.”

Eilert says that versatility – big men with perimeter games are matchup nightmares – is so valuable in being able to stretch the floor. Eilert’s only concern is that Suemnick doesn’t lose his instinct for the game once Huggins’ complicated sets get thrown at him.

“I just tell him, don’t think too much, just play,” Eilert says.

Suemnick says the transition – geographically as well as in level of competition – has been surprisingly smooth. He likes Morgantown’s relatively small size and describes it as “if you put Denmark on top of a mountain.” As far as going from JUCO to Power 5 basketball, Suemnick admits it daunted him a little at first.

“Then I realized that I’ve been playing down in Milwaukee with players at this level since I was seventeen,” he says. “I’ve been training with professionals and going up against Marquette guys and guys who made it in the NBA. It will obviously be different playing against Kansas and well-coached teams with four- and five-star players. But I’m ready.”

Based on what the coaches have been saying and on the fact that he led a recent scrimmage with 14 points and nine rebounds, Suemnick thinks he’ll be in the rotation.

“They’re saying they need me,” he adds. “I’m expecting to play.”

If there are downsides, it is that because of the demands of DI basketball, Suemnick has had to change his degree from biochemical engineering to neuroscience. Also, his parents will have to travel far to see their son play, although Iowa State won’t be that long of a trek.

For Short, who is beginning his own journey down the college basketball road, seeing Suemnick’s dreams come alive is a thrill. He’s like a brother, Short says, noting Suemnick even calls Short’s mother ‘Mom.’

“It’s something we talked about since our freshman year,” Short says. “Denmark doesn’t get a lot of exposure. Milwaukee and Chicago is where the biggest names are. It’s an uphill battle from Denmark to a Power 5 school. He knew it was not going to be an easy process but I think that’s why he took it on.

“It’s amazing to me,” Short adds. “He was talking to Division 3 schools his senior year. The fact that he was taking D3 visits and now may be playing Duke in a month-and-a-half is a real testament to him. You don’t just make it to Power 5. You earn it.”