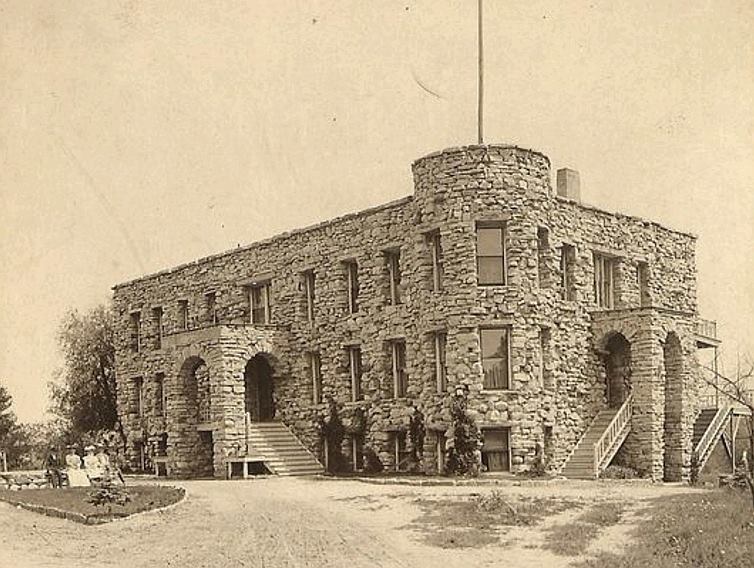 The Maribel Caves Hotel was built in 1900 by Charles Steinbrecker, an Austrian immigrant, who modeled the hotel on resorts from his home country. The hotel was even built in a style reminiscent of his home country, a style not as familiar in the United States which gave it an old world appearance.

With a mineral spring on the property, the hotel operated as a restful resort, where guests could take a break from daily life and become reinvigorated. In the early 1900s, the resort was marketed using the slogan “Typical Country - Forest and Stream. Just the place for the weary to seek.”

The hotel would have been an early adopter of indoor plumbing, using hydraulic rams to pump the spring water located nearby up to the hotel. In marketing materials, the hotel touted having “bath, toilets on each floor, water works…in fact, everything that is to be found in the palatial homes of to-day.”

While the accommodations were luxurious, the real draw of the resort was the mineral spring water. The hotel had the spring water tested by a chemist at the University of Wisconsin, and it was found to contain abundant minerals such as sodium chloride, potassium chloride, sodium sulfate, sodium bicarbonate, iron bicarbonate, calcium bicarbonate, magnesium bicarbonate, and aluminum oxide. It was claimed that the waters helped aid digestion and the elimination of unhealthful matter from the body. Besides being used at the hotel, the spring water was canned and bottled and was shipped to restaurants and hotels in Milwaukee and Chicago.

The opening of the Chicago & Northwestern Railway in 1906 helped provide a boost in business for the resort, but it was not long lasting. Within several years, the hotel and bottling company began to go under. The resort had its fifteen minutes of fame and unfortunately began its decline. The hotel began to be leased, and in 1931 the hotel was sold in a Sheriff's auction to Adolph Cherney.