Through the eyes of your grandson 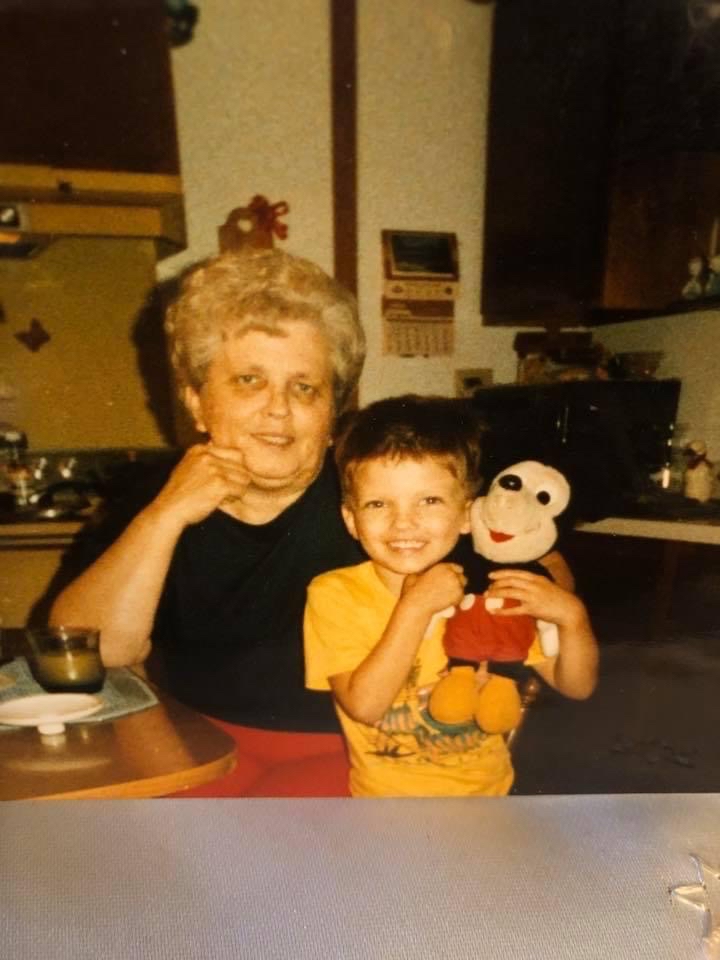 "Love is the greatest gift that one generation can leave to another.” — Richard Garnett

No one is really ever ready to lose a Grandparent. It’s always in the back of your mind it will happen - if it’s tomorrow or several years down the line - we go through life sometimes taking for granted how special they really are to us.

My grandma was a wise, wonderful woman. She was also a stubborn woman who spoke her mind. Grandma Joanne didn't hold back when it came to speaking the truth and as her family we knew that meant she truly loved us. More recently, Grandma leaned in to hug Abby at Stella's birthday party. It was then she boldly questioned Abby's fashionable jeans. She wondered why anyone would want to wear jeans that were already ripped.

And while brave with her words, that same mind would also cause her grief. She'd frequently lose her keys, her cane, or her wallet, in every conceivable place in Denmark and Brown County.

Joanne was born on a farm in the small, unincorporated town of Stangelville, Wisconsin in 1933 to Joseph and Agnes Cisler, and lived her childhood years in Larrabee. Grandma had a wonderful relationship with her family, and her brothers: Uncle Bob, Uncle Garhardt, and Uncle Barney. She spoke fondly of the sister she never knew, Betty Jane, who passed away from Scarlet Fever on Christmas Eve at the age of five. Grandma craved that relationship and I like to believe that Betty Jane was waiting for her first at the Pearly Gates along with her husband Leonard Leiterman.

I never had the chance to meet my Grandpa Leonard. He passed away from a massive heart attack at the young age of 40, in 1974. I heard stories from family members - some with us and some not anymore - about how perfect they were for one another. The story goes that my Grandpa was King of the Ball in high school, and my Grandma always got what she wanted. She stole the King that night and never let him go, even when death do us part. Leonard enlisted in the military for the Korean War, and Grandma traveled around the world with him.

Aunt Sue tells me, at one time, Grandpa was stationed in Fort Leonard. Grandma disliked it so much, he sent her home! At that time, she was pregnant with Uncle Dennis. The irony? Grandpa's job was to escort the sergeant at that time. His name? Dennis!

Eventually, his time serving his country was up. They married November 15th, 1952 in Mishicot, settling on Highridge Avenue in Denmark.

There was also Doug, Sue, John, and my mother Kay. Can you imagine what it was like with six children in the house? I'm told Grandpa built his very own "Field of Dreams” in the nearby cornfield and spent many a Sunday playing ball with the kids. I hear Grandpa was a riot. And Grandma was infatuated with him. Their time together didn't last long. Grandma spent 48 years without him. I often asked her why she didn't remarry and there was never a clear answer. But I could feel, see and hear how she was when she talked about him. No one could live up to his love and his character.

When Grandpa passed away, Grandma had to re-enter the workforce. She took a job at Brown County Publishing and stayed there until the early 2000s. There's no doubt in my mind, my own interest in news and newspapers was written in my journey of life because of my Grandma's choice of work. I had an opportunity to see firsthand some of the "greats” that worked with her during her 30+ year career there at The Denmark Press. She found a way to get me in the paper frequently. I loved being able to walk into their old office building and see Grandma right there waiting with a smile. I think she got a kick out of the fact I  eventually bought and now own the newspaper in town, even though she tried telling me I should sell it because she was worried about me.

There were many times I had to run into Krause's, Village Mart, or the Co-op to get the 25 cent Denmark Press newspaper for her or my mom. She never forgot to give us $1, so we could get a treat for ourselves inside the store.

Grandma had a special relationship with each one of her Grandchildren. I don't care what anyone says, Chad was her favorite. Well....maybe Jake, since he was usually called late at night to bring her to Main Street Market or Kwik Trip to get bananas, muffins, and milk. I found out after Grandma passed away this week she would actually try to avoid me going for her or bringing her grocery items. I guess I didn't pick out the bananas correctly.

And believe it or not, even if Grandma would only say she had grandsons, she did have granddaughters, too. All together, she had 11 grandchildren: Brad, Chris, Chad, Rachel, Angela, Emily, Jake, Samantha, Alex, Jack, and Jay. They were her treasures.

AND...No matter what she said in her lifetime, Grandma liked her in- laws: Sandy, Lisa, Mike, and Curt. She was toughest on her son-in-laws, probably because of how they treated her during Sheephead. A few times a year, we would call into session a few games of “you know what on your neighbor”, a version of sheephead. We always tried to position the chairs so Grandma had to sit by Uncle Mike and my dad, Curt. She would get heck from those two the whole game, would hold her queens until the last second, win all the money, and just have a ball, even if at times she pretended she didn't. When everyone left, we would have to pick up, and typically we would find half-drank soda, wine, and unfinished candy bars; that"s how my Grandma rolled.

Lastly, GG absolutely adored her great-grandchildren. She spent many nights, weekends, birthday parties, and different events with them all: Amelia, Sophia, Lucy, Stella, Jack, Owen, and Wyatt. You will see many pictures of the light she brought into their young lives, and Grandma"s willingness to teach them how important Lawrence Welk was, on those family Saturday nights.

We cannot forget her partner’s in crime, her best friends in life: Donna Mancheski, Carol Kreft...and later in life Betty Hazaert and Betty Ausloos. I knew each lady very well. You always knew when Donna was present somewhere. She used to yell at me down the aisle at Main Street Market, “Chris...Chris, tell your Grandma I said hello.” Also, Donna used to tell my Grandma this, “Joanne, you can come over anytime, spend time with us, sleep over, but you cannot sleep in the same bed as Felix and me.” One time the partner’s in crime were shopping at Prange Way, they all got lost and couldn’t find the other person, and Donna   announced on the PA, “Will the ladies from Denmark please come to the front of the store.” Aunt Sue remembers them. Aunt Sue always wondered why Donna and Felix’s kids would call their parents by their first name, so Aunt Sue attempted to call her, Mom, “Joanne”. (Laughing)...that didn’t go over too well. She always said Carol was such a great friend to her throughout the years. The two Bettys made life really enjoyable in the later years.

Grandma was a very classy woman. Mrs. Heiser always did her hair every few weeks, even styling her very last hairdo on this earth. Chad said this comment, "Grandma always had a perfect, classy white perm, but just like her personality, her perm had a little flare.”

My mom helped fix her hair every Saturday and displayed classiness of her own with her commitment and patience. She and dad kept their home phone number to make sure Grandma could always reach them. Uncle Dennis spent Sundays with her, and Aunt Sue did her books and some other obligations, while also fixing her up with the perfect getaway to their home several times a year.

Uncle Barney and Grandma had a close relationship, as they were the last siblings of the Cisler family. UB always watched over his sister. I have no doubt, Grandma knew she was deeply loved and cared for.

My mom, Aunt Sue, and my brother, Jake, and I were at the hospital when Grandma took her final breath. We were having a family "debate” about something and I truly believe she got tired of us nitpicking each other all day, and took her last breath.

One more thing? Grandma loved storms. The day she passed, Mother Nature let loose with a storm of her own, almost as a tribute to the magnificent woman we lost just hours earlier.

I am going to miss our Saturday night dinners with Grandma where she ruled the TV and watched polka and Lawrence Welk at my parent's house, her wise conversations about religion and life, and her lectures that included, "you better be nice to your mother” or “you dacent do that, Chris". It"s hard to let go of all she did for our family, what she meant asa centerpiece to who we are and what we stood for, and the fun and entertainment she brought to our lives.

Maybe it's because of my love for weather or maybe it's because I am looking for comfort....but I keep coming back to that storm the night Grandma died. I believe the ruckus was a big celebration of a life well-lived. Or maybe everyone greeting her was jumping out of the way as she raced into my grandpa's arms after nearly half a century apart. What love. What a magical time to witness.

We miss her terribly. But we know our time here with grandma is over for now. It's your turn Grandpa. Take care of her.

We love you Grandma and we will forever miss you. You were the GEM of the family. 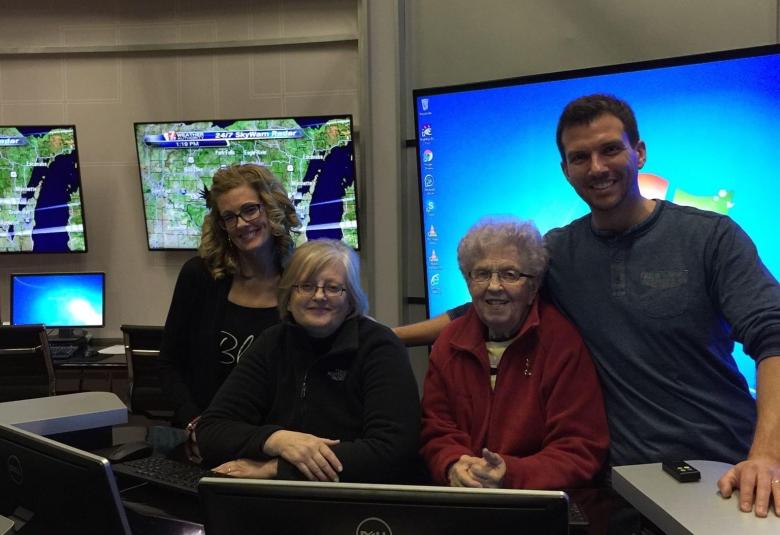 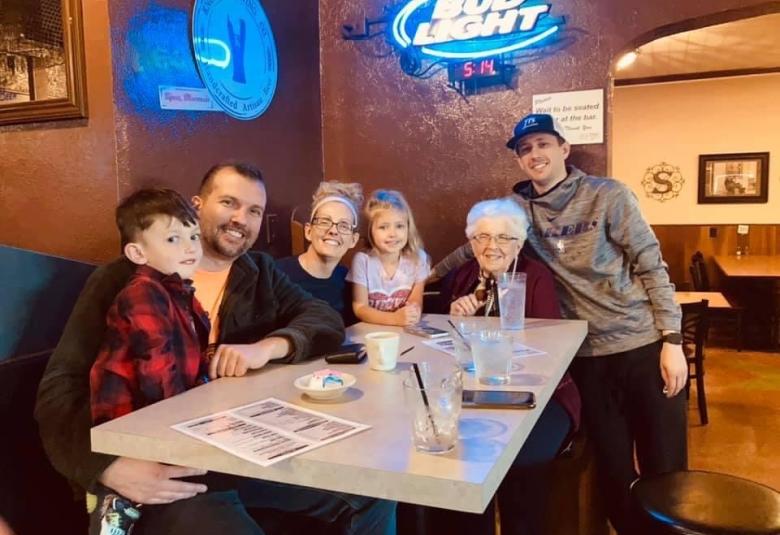